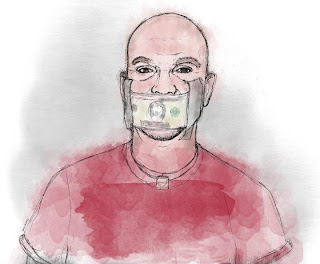 I had so much fun making my Ten Journalists in Ten Days series that I’m going to do it again with a different and much more serious theme: the “Occupy Wall Street” demonstrations. For ten days, one demonstrator will be featured each day. Each demonstrator will have a dollar bill taped over their mouth which speaks to ending the silence on the offenses of oppression, corporate greed, tax breaks for millionaires, social injustice, corruption, predatory lending and classism.  I won’t be profiling any of these protesters because, apart from their likeness and first names, they remain anonymous.

Chris Hayes recently had a really in length, smart talk with his panel of guests on his new morning show which shed some light on the Occupy Wall Street protests. His show featured an outstanding interview with one of the thousands of victims of predatory lending, Dixie Mitchell. The panel talked in detail about the reasoning behind the Occupy Wall Street protests. Members of the panel included Writer for The Nation and Co-Host of Citizen Radio, Allison Kilkenny, Independent Journalist and Contributor for Alternet.org, J.A. Myerson, Contributor for CBS Sunday Morning, Nancy Giles, Michael Brendan Dougherty of “The American Conservative” Magazine, Contributor for New York Times Magazine, Rebecca Traister, Sports Writer and Contributor to The Nation, Dave Ziron and Executive Director of the Institute for New Economic Thinking, Robert Johnson.

So without further ado, Day One of my Ten "Occupy Wall Street" Demonstrators in Ten Days: Mike.